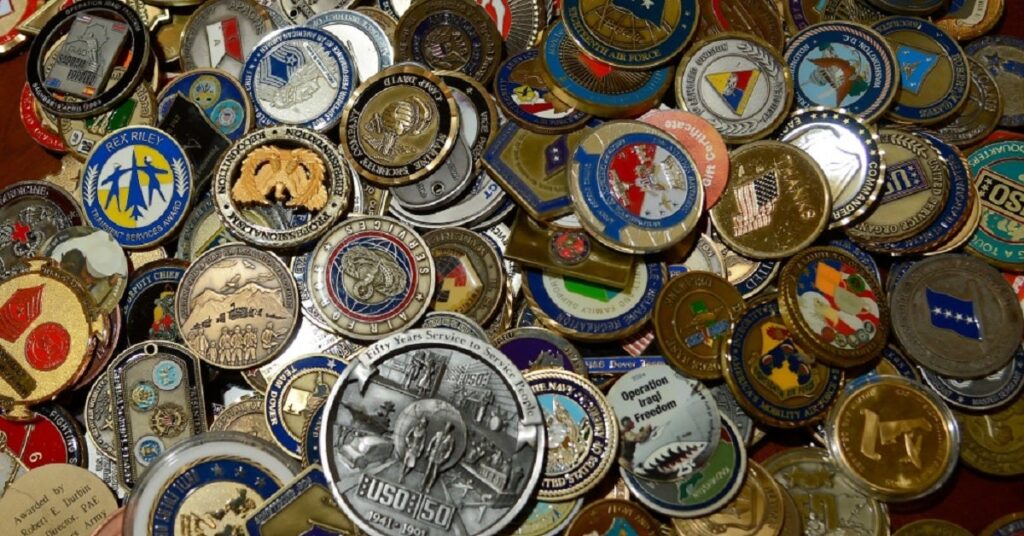 Coin Challenge: Are Military Coins Worth Anything?

Challenge coins are commonly given as tokens of appreciation in all sorts of environments. From rewarding favorite customers in a business setting to commemorating service members for their efforts to keep our communities safe, challenge coins are valuable and are often kept forever by their recipients.

This rarity can make certain coins quite valuable, as well.

And one of the most common uses for challenge coins is in the military. Military coins represent service and accomplishment and they aren’t given lightly. To earn a coin is a major achievement, and it’s not something that soldiers will take for granted.

If you are a veteran or active service member, you might be wondering if these coins are worth anything. Or, if you stumbled across some coins at a second-hand store, you might be tempted to pick them up.

Keep reading to learn if these coins hold any resale value, or if you’re better off holding onto them yourself.

What Are Military Coins?

Military coins are a specific type of challenge coin. In general, challenge coins are small emblems given to show proof of membership to a particular organization, or that you participated in a specific military unit or operation.

They are metal coins with elaborate designs on them, and they are made in limited batches.

While the idea of this type of coin has been in use for many generations, its most common use in recent decades has been in the military. These are often used as symbols of rank.

And they are always given by those of high esteem. While the design of a coin is important, it’s who gives you the coin that ultimately determines its value and worth. To have a coin given to you by an admiral, or by the president himself, is a huge honor and would place a lot of weight on the coin.

Several presidents are known for handing coins directly to service members, starting with President Bill Clinton. President Obama, for example, would also place coins on military graves in honor of their sacrifice.

The Rarity of Military Coins

Coins are created in all branches of the armed services, from the Marines and Army to the National Guard and other branches, military coins are being designed and given all the time.

Some are more general and basic than others. But there are quite a few rare coins in circulation as well.

For example, in the 80s, certain coins were designed and given to B-52 tail gunners after graduating from their programs. But this position was phased out altogether. So the coins created for this rank are now considered to be very rare.

As with anything, there are collectors out there who are always looking for anything rare. Those who have military backgrounds are more prone to want to collect military challenge coins. They’ll likely have coins that they earned themselves, as well as many other coins that they found or purchased.

Also, those who are highly interested in history and politics tend to have extensive coin collections.

Just like art and antiques, there are always people interested in collecting challenge coins. You can often find coins for sale in thrift stores, antique shops, and pawnshops, along with various collectible marketplaces.

Are Military Coins Worth Anything?

Military coins are unique. They can be very hard to put a value on and can range widely in price due to increasing or decreasing demand.

In general, coins issued by current military and political leaders are held in higher esteem and are more valuable. This is because these coins are new, and the military coin holder who received them will generally hold onto them, so few are floating around in the market.

As coins age and the issuing officer retires or passes away, demand for those coins tends to decrease, and with it, the value.

The most important factor when determining the value of the coin is who issued it. A coin issued by the current or previous president will be of high value. Coins issued by lower-ranked members of the military or government will be less valuable.

Value has very little to do with the size of the coin, the design, or anything aesthetic factor. It’s all about who originally handed the coin to a recipient.

How Much Are Military Coins Worth?

There are certain coins that exist in abundance. These are often coins issued to veterans groups and general military units like engineers or supply units.

Common coins generally sell for less than $20 per coin since they aren’t necessarily rare.

The coins that do hold some value are those issued by higher-level leaders, from generals and admirals to the special forces and navy seals. Depending on the coin and who originally issued it, you can sell these for anywhere from about $30 to $500, and possibly more depending on the current collector’s trends.

If you were the recipient of a military coin, you might naturally think that a particular coin is worth a lot of money. That’s because beauty is in the eye of the beholder. Because you earned the coin through hard work and sacrifice, it’s very valuable to you.

In these instances, it’s better to hold onto that coin yourself and cherish it. Get a military coin display case and share your accomplishments with any that enter your home.

But if you do stumble upon some coins that you think may have some value, and don’t hold sentimental value, it’s worth having them evaluated.

You’ll need to work with a reputable collectible dealer or antique specialist. They know what collectors are currently looking for, what’s valuable, and what’s not.

They should be able to get you the best prices for your coin than if you were to try selling them on eBay or at a local auction house or pawn shop.

As you can see, military coins do hold some value but it’s hard to say for sure. Demand for these coins fluctuates. And as demand decreases, so will the value of any given coin.

But, if you stumble on the right coin or collection of coins, there’s a chance you can make a decent amount of money if you know where to sell them.

Looking for more tips like this? Head over to our blog to keep reading.